As part of the European Heritage Days, on 15th and 16th September, the Communauté de Communes Interrégionale Aumale - Blangy-sur-Bresle organized several visits to the former V1 launching base of the Poteau de Montauban, near Guerville. This event was successful.

During these European Heritage Days of 15th and 16th September 2018, despite a limited publicity, 255 visitors came to the V1 site of Guerville - Poteau de Montauban where Mr. Yannick DELEFOSSE was waiting for them, author of the book "V1 - arme du désespoir" (litteraly "V1 - weapon of despair"). During several guided tours of about 2h30 each, he presented the operation of the V1 and its implementation, to conclude with a descriptive tour of the various technical buildings and the known history of the site in 1944.

The audience present paid a great deal of attention to Mr DELEFOSSE's explanations and the comments of congratulations and encouragement were made at the end of each visit. We can only be reassured by the enthusiasm of the public and motivated for the continuation of the project which will be achieved on the 13th June 2019.

Here are some photos of the event,
with M. DELEFOSSE, in the center, during one of the presentations 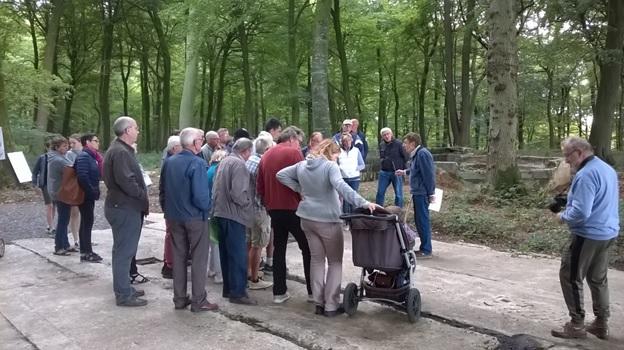