The V1, a flying bomb

The V1 is officially called "Fi 103" (in reference to the aeronautical construction company Fieseler which actively participated in its development), it then changes to become "FZG 76" (for "Flak Ziel Gerät type 76" which means "Flak target craft" - the term Flak means anti-aircraft defense). The use of the name "V1" occurs only later, after the put into service of the weapon. From June 1944, the German propaganda services opted for the denomination "V1" because the flying bomb is the first of the Vergeltungswaffen, the "weapons of retaliation" of the German army (also called secret weapons). The V1 should not be confused with the V2, a rocket with an explosive charge, which will be introduced from the 8th September 1944. The V2 is also part of the Vergeltungswaffen though its principle was studied from the beginning of the 1930s by the Reichswehr, even before Hitler accession to power.

The V1 is an unmanned aircraft with an explosive charge and a pulse jet engine. There are eight versions of V1 (some functional, others limited to the project step) here we will focus on the version "A1", the most common version. The V1 is considered a so-called "saturation" weapon, that is to say that the psychological impact on the civilian population is more important than precision. To be effective, it must be produced in large quantities and its cost must be limited. The V1 aims to pose a permanent threat to the south of England, this weapon that strikes blindly must weaken the population morale and determination. 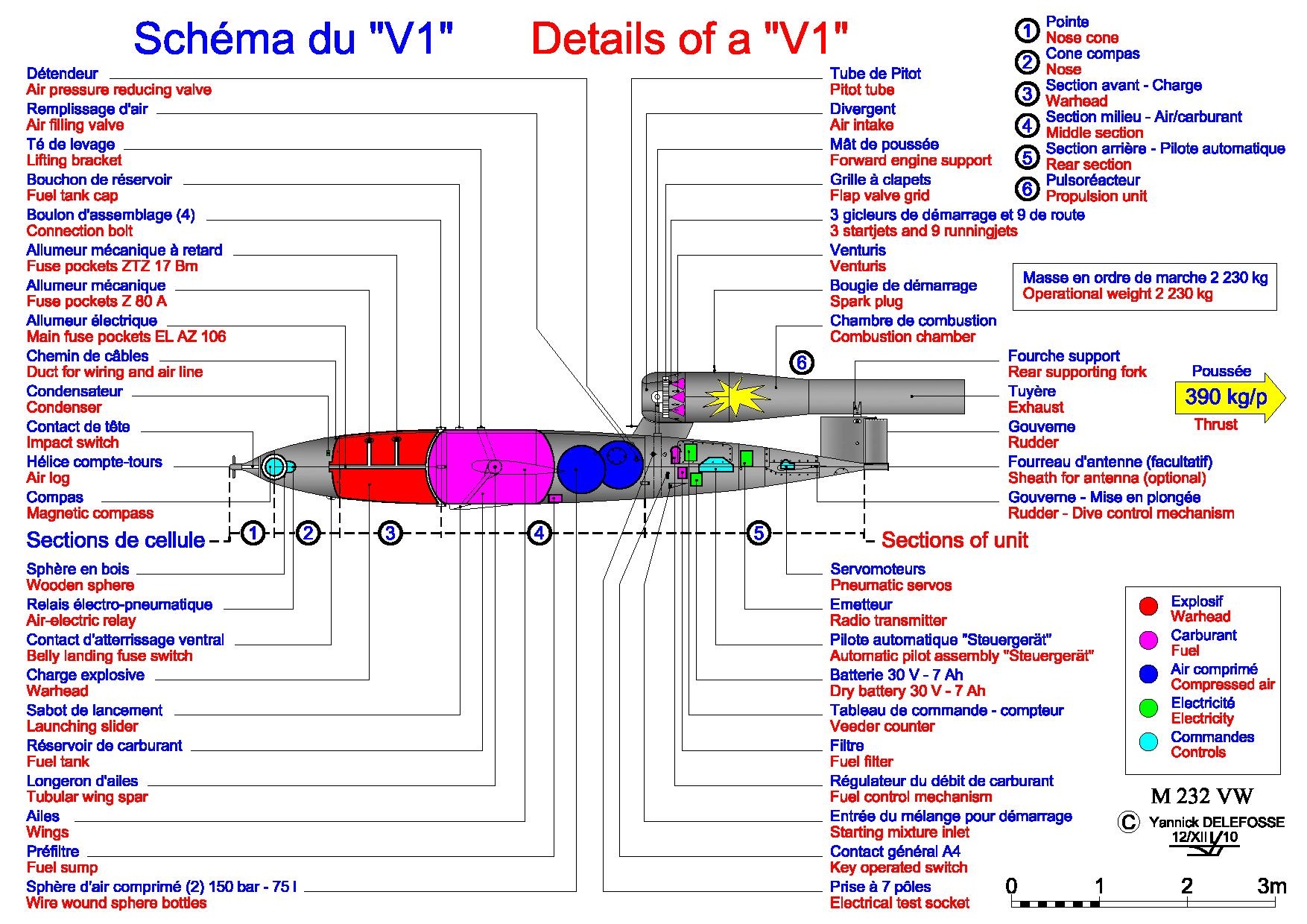 The operation of the V1 flying bomb

The flying bomb is the result of a technical and technological know-how new for the time. At the front of the aircraft is arranged a small propeller, it is connected to a tachometer and operates in flight through the run of the weapon. The number of rotations is fixed before takeoff according to the distance of the target to reach and the atmospheric conditions. Once above the objective, the tachometer activates a flap system that plunges the device, the arrival of fuel is then stopped. The contact of the front of the weapon with the ground activates a striker of firing. A second striker placed under the nose of the aircraft allows firing in case of landing on the underside. To stay on course, the V1 has a magnetic compass connected to the main gyroscope of the weapon via an electro-pneumatic relay. These two devices, previously set on the non-magnetic platform of the launching ramp, allow the V1 to maintain a straight trajectory to its objective and to guarantee the precision of the flight. However, there is a certain margin of error of several kilometers, due in particular to the "skid" inherent in the aerodynamic design of V1 or due to weather conditions.

The V1's pulse jet engine allows it to reach a cruising speed of around 580 Km/h and targets located more than 200 Km from its starting point. However, for the take off the only pulse jet engine is not enough[1] : it is necessary to catapult the flying bomb from a launching ramp oriented towards the objective. It includes a concrete platform (and protective walls for "first type" sites) and a metal structure that is called "catapult". Long 49 meters and inclined 6 degrees from the ground, it is firmly attached to the concrete pads of the firing range to withstand the thrust produced by the launch of the weapon. To fire a V1 it is imperative to follow a specific protocol in which several outdoor devices come into play. First, a transshipment trolley is used to position the V1 on the catapult. Inside this one there is a tube which crosses it over all its length, it is split longitudinally on its upper part. In this tube is placed a piston which allows to reveal a hook on the top of the catapult thanks to the previously mentioned slot. It is on this hook that the flying bomb is fixed. The use of a steam generator is then required. It anchors at the end of the catapult tube, it contains a chamber in which are mixed two chemical solutions: potassium permanganate and hydrogen peroxide. The result releases an important energy inside the tube. The piston then undergoes a strong thrust, it starts moving and drives the V1 with it. At the end of the catapult, the flying bomb is projected at a speed of approximately 250 Km/h, a speed sufficient for the pulse jet engine to takes over. The pulse jet engine is started about two minutes before firing. When it leaves the catapult, the weapon disengages from the piston that ends its race about 200 or 300 meters from the launching pad and can be reused thereafter. The chemical solutions used in this process require a thorough cleaning of the catapult and the steam generator once the launch is made due to the very high corrosiveness of the chemical reaction produced.

[1] In practice, the pulse jet engine has sufficient power to take off the aircraft but this process would be performed under conditions incompatible with operational use.

To better understand the starting-up process of a V1, we advise you to watch this video (divided into two extracts) from the archives of the German army. This is a general overview of the V1, its technical characteristics and its operation, and a detailed description of the launching process of a flying bomb: from its arrival on the launching site to its takeoff from the catapult.

Although in German and of rather limited quality, this video has the advantage of showing the different stages of the implementation of a V1.

As an indication, the illustration of a launching of V1 starts from 1'12 '' on the second video.